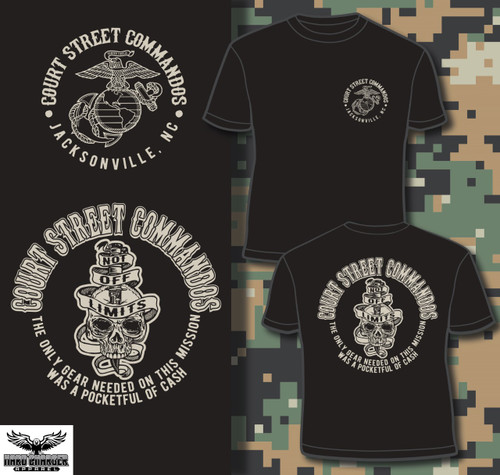 This is a brand new 100% pre shrunk cotton LONG SLEEVE t-shirt.  The left chest logo has "Court Street Commando - Jacksonville, NC" wrapped around the EGA.  The back logo reads "Court Street Commandos - The only gear you'll need on this mission is a pocketfull of cash" wrapped around the skull and K-bar.  "Not off limits" refers to the establishments where the Marine Corps preferred Marines not go.  Of course that's exactly where we went.

There was a section in the base newspaper titled "Off Limit Establishments" with a list of these establishments.  The establishments would counter this list by having marquee signs outside of their places reading "Not Off Limits."  Court Street was made up of all these types of establishments and was shut down in 1986.  Every Marine stationed at Lejeune before 1986 had made a visit to Court Street.